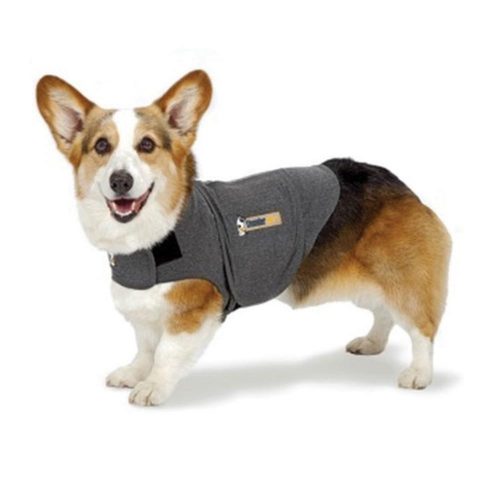 As we begin to get into spring showers followed by summer festivities, you may be thinking about the fear in your dog that they experience with thunder and fireworks. Here’s what you can do to help your dog beyond the fear of thunder (and fireworks). If your dog suffers from separation anxiety, check out this past blog for more tips.

But First, What Not To Do

When we were kids, our parents rescued a miniature schnauzer named Spicy for my brother and I. Spicy took several days to adjust to us, but within the week, she was our pal. Whenever our outdoor dog, Buck, walked by, Spicy would run to where her food bowl was and begin to eat and growl at the same time. I always thought it was cute and funny, but now I know that was a sign of her fear.

I also soon discovered something that was particularly hard for Spicy – and many dogs all over the globe – is when thunder or fireworks would hit. The sudden crack would scare her to the point of being utterly terrified. Fear of thunder, in her and other dogs, causes them to often hide. In Spicy’s case, she would hide underneath an end table and cower, then shake and pant so much that she would drip saliva from her tongue onto the carpet, which didn’t go over so well with my mom.

During those times when Spicy was most distressed, I would try to comfort her telling her in a soothing voice that everything was fine and she was okay, and I stroked her back.

The last thing I should have done for her is encouraged her fearful behavior by stroking her and giving her positive feedback. I don’t mean that we should scold or be mean, however. When dogs are frightened to that degree, it is best to be a support, but do so in silence.

To overcome fear of thunder and firework, some people use a tool commonly known as a thunder shirt for their pet. Sadly, these don’t work for every dog. My male mini-schnauzer, Emmett, would react the same as Spicy did, but Emmett always looked like he was going to have a heart attack because he shook and panted so bad.

If that doesn’t work, what can you do to help ease the fear of thunder while not encouraging it?

Since Emmett didn’t respond to a typical thunder shirt, I became a human thunder shirt for him and that did the trick. I picked him up and held him tightly, still giving him enough room to breathe. When your dog’s body is ramped up from whatever stimulus is engaging the fear, their bodies need a bear hug in order to calm the central nervous system down.

It’s the same with people. When someone is having a panic attack and can’t move because of their fear, a strong, but tight hug is in order. With Emmett, I hugged him and said nothing. While he was in my arms, I would take one hand and make it like a claw. I would use that claw to make small, methodical circles down his back to help calm him. Basically, I was giving him a massage because massage promotes release.

If I had merely stroked him, I would’ve encouraged and nurtured his fear. Dogs respond to your tone of voice and body language. So, instead of using a soothing voice, I said nothing. The soothing voice communicates to your dog that this is the behavior you want from him when in actuality, it is the last thing you want for/from him.

Using your hand like a claw to give a massage will help tremendously. Once your dog begins to relax in your arms, then you can begin stroking/petting him. Again, make sure there is no direct engagement with your dog such as talking or looking at him. Watch your TV so that your focus is on something other than your dog, but keep doing the massage. It won’t be long before your dog sees the massage as something to look forward to.

As always, if you have a particular question or would like to discuss something, please feel free to call me. A dog trainer and behavior expert for more than 2 decades, I’ve heard and/or experienced it all. Also consider more socialization for your dog including dog training classes and/or pack walks, held through the summer in the Colorado Springs area.