6 Tips For Housebreaking Your Puppy 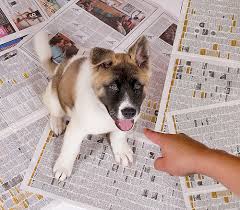 Housebreaking your puppy doesn’t
have to be stressful.

Generally speaking, the process of housebreaking your puppy often brings on feelings of nervousness and worry, but the process does not have to be stressful—for you or the puppy.

The truth is, you have Mother Nature working with you right from the start. When the puppies are first born, they eat and they relieve themselves inside the den, but the mother always cleans them. There is never a scent of urine or feces where the puppies eat, sleep, and live. When they get old enough, they learn to use outside areas as they imitate their mother.

In this way, all dogs become conditioned to never to eliminate in their dens. From two to four months of age, most pups pick up on the concept. You will find housebreaking your puppy can be quite easy by using a crate as a den, as it is part of their natural programming.

Another built-in plus when it comes to housebreaking your puppy is that her digestive tract is extremely quick and efficient. Five to 30 minutes after the puppy eats, she’ll want to defecate. So with a consistent eating schedule, and your attention to the clock, your puppy can maintain regular trips outside.

Here are the housebreaking tips I suggest:

***A special note on crating: if you put him in it and he proceeds to bark and cry and jump around, wait him out. I know it will be hard to watch, but if you let him out when he’s in the midst of his anxiety attack, you’ll have taught him all he has to do is throw a fit and you’ll let him out. Instead, just sit next to the crate – no looking, no talking, no touching. No direct engagement. Wait for him to calm down and once he does – and he will – then you let him out. That teaches him to be calm before he gets to be out and back with the family.

Done correctly, housebreaking your puppy should not be a turbulent production, but just a matter of putting a little extra work into getting your puppy on a schedule during the first weeks after she arrives at your home. Don’t let unnecessary stress over this very natural, uncomplicated process taint any of the joy surrounding the puppy training process and your new dog’s puppyhood.

For more questions or comments, please contact Jill at https://trainedfamilydog.com/contact/